THE BEGINNING OF THE GRANBURY QUILT GUILD

The Granbury Quilters Guild was an idea conceived in 1997 by Jeriann Sharkey, Donna Gudat, Lee Rash and Liz Berry. They realized the need for a group in Hood County after driving to Cleburne for over two years. In January, flyers were passed out and displayed anywhere that material and sewing supplies were available. The first meeting was held in what is now the “old part of the library”. Several interested ladies were present and so began the organization of quilters. Granbury Quilt Guild was formed in March, ’97 with election of officers, dues and programs.

A letter was received from The Friends of the Library requesting a quilt with the history of Hood County to be displayed at the library. The late Dr. Susan Stumbaugh, President 2001, led the committee in creating such a quilt which currently hangs in the office of County Judge Andy Rash. It has traveled to several quilt shows including the renowned Paducah Quilt Show where it received an honorable mention.

Our quilters’ emblem/pin in the shape of Hood County was the result of a contest held by the membership. The late Dr. Susan Stumbaugh was the designer of our Granbury Quilters Guild emblem.

Each year, the guild commits to a service many local charitable organizations with projects made by our membership. The guild has made many lap quilts for all the nursing homes in Granbury, baby quilts for the neonatal department at Harris Hospital, knitted caps, booties, mittens and covers for prenatal babies at Parkland Hospital in Dallas, baby quilts for the Brazos Pregnancy Clinic and bed quilts for Habitat for Humanity. Other projects include quilts to the Ada Carey Shelter for women and children and pillowcases for soldiers in Iraq and Afghanistan. We also supported a national drive for quilt blocks for the Home of the Brave Quilt Project. These blocks are made into quilts and given to families of fallen soldiers lost in Iraq and Afghanistan.

The first quilt show (which was not judged) was held in 1999 on the Square at what is now Hooks Real Estate office. It was on a small scale but there were still plenty of entries. The quilt show is held bi-annually.

In March of 1997, the Granbury Quilters Guild chose to make a quilt showing some of the historical features of Granbury. The quilt was intended to be shown at the guild quilt shows and to be displayed at Granbury events upon request.

The quilt design committee was chaired by the late Dr. Susan Stumbaugh and included Wendy Foist, Jane Lane, Bobbie Males, Mary Peters and Joanie Walker. This group developed the design for the quilt and individual buildings and figures.

Mary Peters and Wendy Foist drew the figures that are used in the quilt. In addition, Mary drew the locomotive, the cotton wagon, and the old bridge and hand-painted the field of bluebonnets that is seen at the foot of Comanche Peak. J.C. Campbell’s drawings were used as a basis for many of the blocks.

The quilt is approximately 110 square inches. In the center is the Hood County Courthouse, complete with July 4th fireworks and General Granbury‘s statue. It is surrounded by blocks representing some of the historical buildings in Granbury, including the Opera House, the Bank Building, the Nutt House, and the Nuttshell. Farther away from the Square are other public buildings as well as homes and churches of early years in Granbury. Also shown is the Depot, the old bridge and a train. 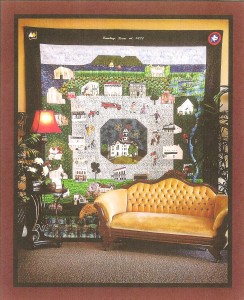 On the top edge of the quilt is Comanche Peak with an Indian and his tepee sitting on a field of bluebonnets. A few other buildings and homes are found in this area.

The quilt also features one of Granbury’s special events, a parade complete with flag bearers, a buffalo rider, a penny-farthing bicycle, and a fire engine. Other figures include a horse and buggy, an old-fashion cotton wagon and a quilter.

Along the right side of the quilt flows the Brazos River on its way to Lake Granbury. A couple of youngsters are shown on the lake just having fun. 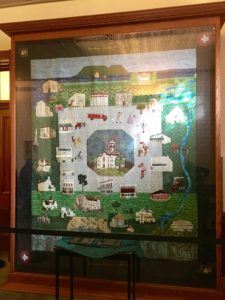 Steve Berry reveals the Quilt in the new display in it’s new home at the Granbury Courthouse. 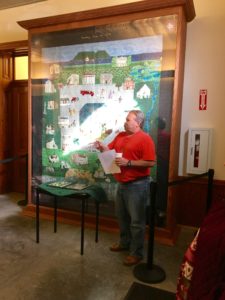 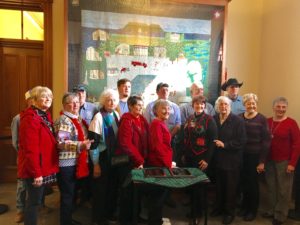 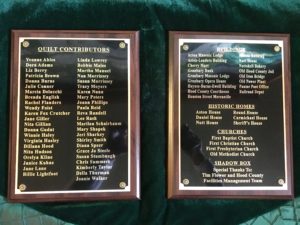